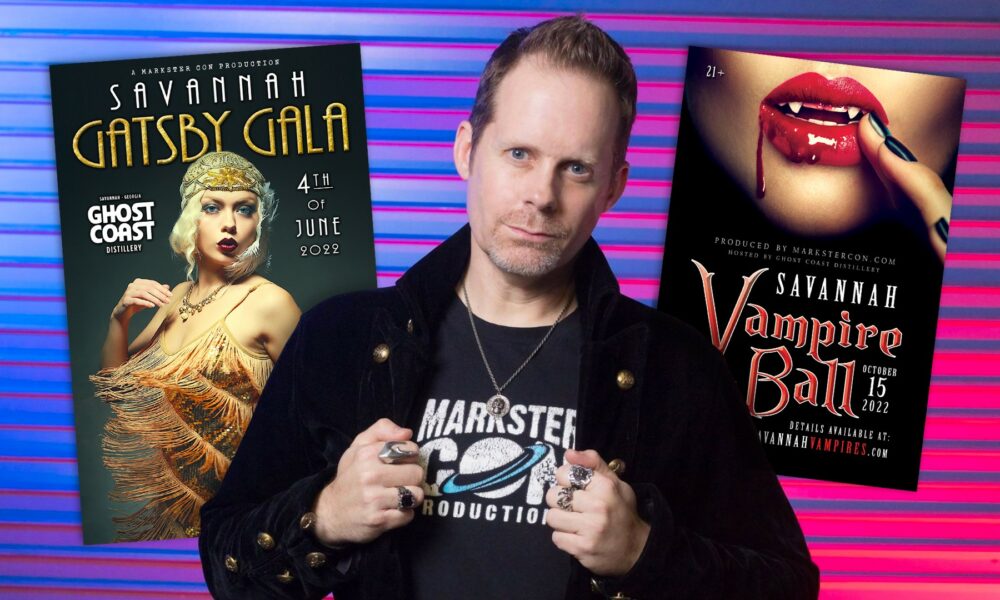 Today we’d like to introduce you to Mark Baggett.

Mark, we appreciate you taking the time to share your story with us today. Where does your story begin?
Looking back on all of the experiences and elements that helped mold me into the Event Producer I am today, in retrospect, it all seems like it was meant to be. From being a DJ and promoter in high school to majoring in Graphic Design in college to stumbling upon Dragon Con and cosplay in Atlanta – all of that played integral parts in the success that has come my way with Markster Con Productions.

Up until about 10 years ago, never did I think “Man, I really want to throw parties for a living” but I guess the Universe knew me better than I knew myself and that’s the path I’ve followed. I’ve always been a creative person who loves making others laugh and still get a rush when I see other people smile because of what I’ve done or created.

Being able to put together fun and unique events goes back to high school and college when I produced dances, get-togethers, and socials. Being able to be quick and creative with promotions and marketing, which is an integral part of Markster Con, I can thank my college education in Graphic Design as well as being an editorial Graphic Artist for a large daily newspaper which helped me become very quick and deadline oriented.

Being able to understand and embrace my inner geek I can give thanks to the massive sci-fi convention in Atlanta called Dragon Con which introduced me to the world of cosplay and then went on to inspire me to host my own themed events which led to the creation of Markster Con.

At times, I take for granted all of the learning experiences I’ve had and how they have molded me into the event producer I am today because it comes so naturally to me now – be that either showing people a good time or knowing all of the steps needed in order to bring it all together.

But I’m very thankful for it all because I truly do feel like I’m doing what I was meant to do.

I’m sure you wouldn’t say it’s been obstacle-free, but so far would you say the journey has been a fairly smooth road?
With all the headaches and stresses that come with being “throwing parties” for a living, there are many more positives than helping balance things out. I’ve been blessed to know that I’ve helped introduce several couples via Markster Con events who’ve gone on to get engaged and then married. Markster Con events have also had the honor of being chosen for numerous wedding proposals as well as being the destination for bachelorette & bachelor parties.

I’ve seen shy people come to events where they meet others who share their own fandoms and then go on to be a great support system for one another with long-term friendships. Many of the talents I’ve worked with over the years have gone on to blossom into wonderful professional photographers and entertainers also.

Knowing that what I’ve created has helped bring people together and has positively changed people’s lives is probably the most rewarding aspect of Markster Con.

It goes without saying that COVID-19 severely impacted Markster Con as I wasn’t able to produce an event for over two years which also means my one source of income dried up. However, I survived and am really looking forward to once again bringing unique and fun times to Savannah, starting with the upcoming ’20s themed GATSBY GALA on June 4th, followed by the VAMPIRE BALL III on October 15th, 2022.

As you know, we’re big fans of you and your work. For our readers who might not be as familiar what can you tell them about what you do?
Markster Con is a year-round event production company that specializes in adult-aged “geek & alternative” themed events, such as pub crawls, dance parties, trivia nights, photo studio parties, and online contests all incorporating a strong cosplay/costume element. The events that Markster Con produces center around fandoms that are close to my own heart, as I follow the principle of “if you build it, they will come”.

Because my events have been so well received in Savannah, I have been able to expand to several other cities including Atlanta, Athens, Columbus, and Macon, Georgia; Charleston, South Carolina; Birmingham, Alabama; Bristol, Tennessee/Virginia; Miami and Daytona Beach, Florida; Richmond, Virginia and even Denver, Colorado. My goal is to continue to bring “geeky” fun to other parts of the country as Markster Con’s fan base and reputation for producing highly entertaining experiences grows.

One thing that sets Markster Con apart from other events is that I pay great attention to detail. I pride myself in making sure that attendees get their money’s worth at Markster Con events. As an Event Producer, I must make sure those who attend are happy and that Markster Con has delivered on what it’s promised, no matter whether behind the scenes the event has been a financial success or failure.

A highlight from producing events has to be when Markster Con’s WIZARD PUB CRAWL was voted ‘BEST PUB CRAWL IN SAVANNAH’ by readers of “Connect Savannah” weekly newspaper in both 2019 and again in 2020 which was a huge honor.

No one knows the finest details I have in my head about how or what I want a Markster Con event to be like so most times no one even notices when things go differently than I had planned. I’m my own worst critic and can be too hard on myself at times since I tend to set my personal bar so high.

However, with time and experience, I’ve started reminding myself that doing what I do is supposed to be fun and that I do it because I want to, not because I need to and that has helped greatly.

Being as prepared as I can is great but being able to adapt to any situation is even better. 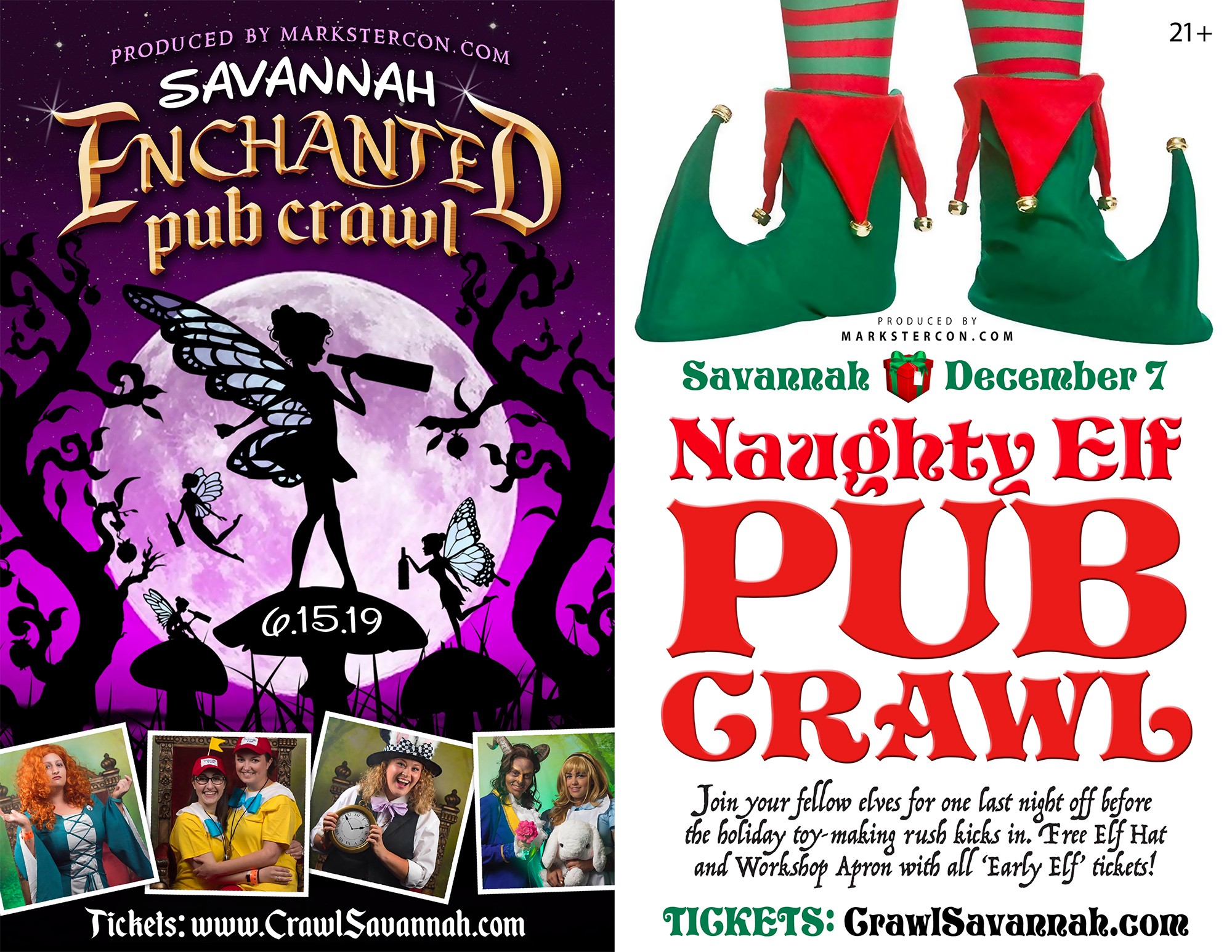 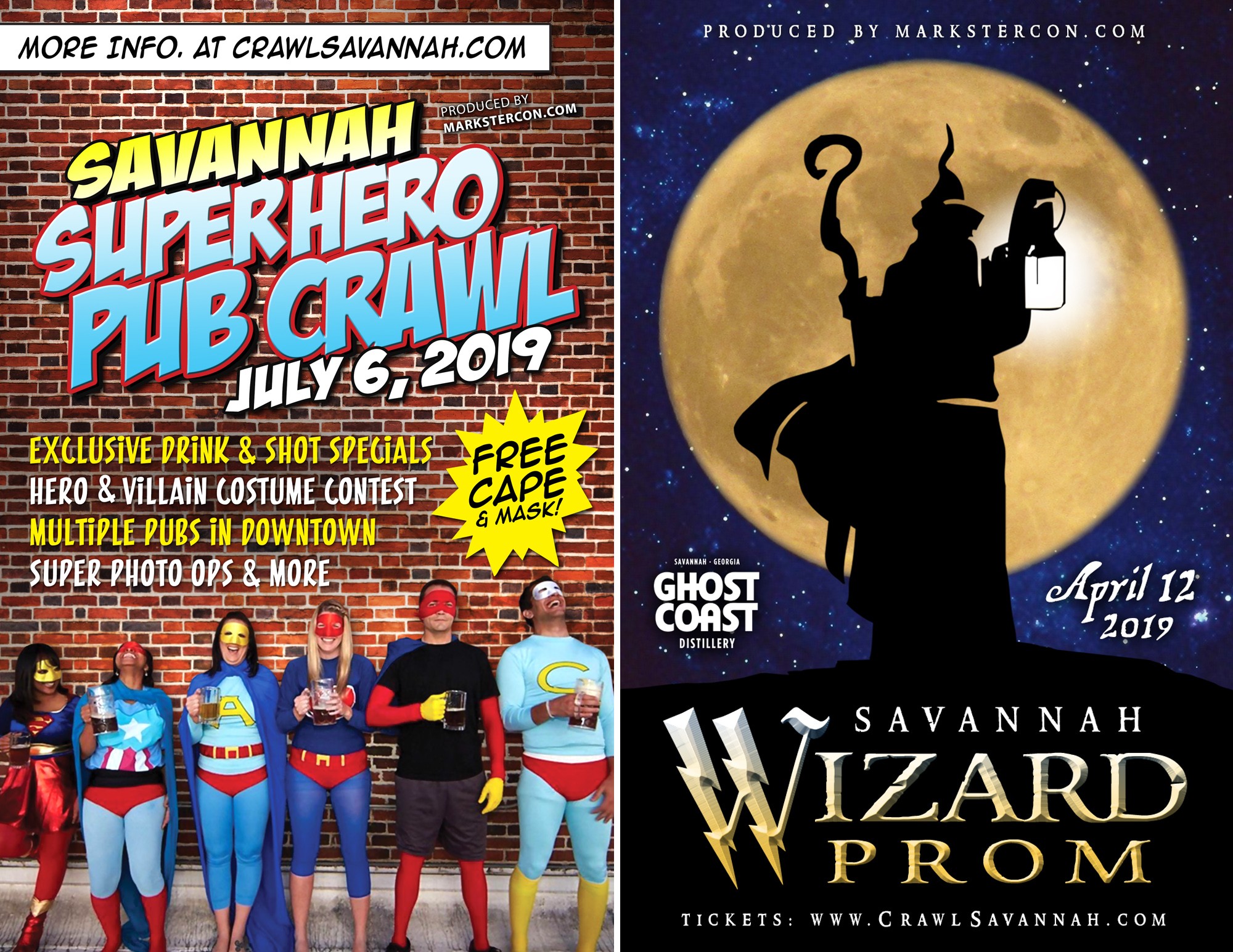 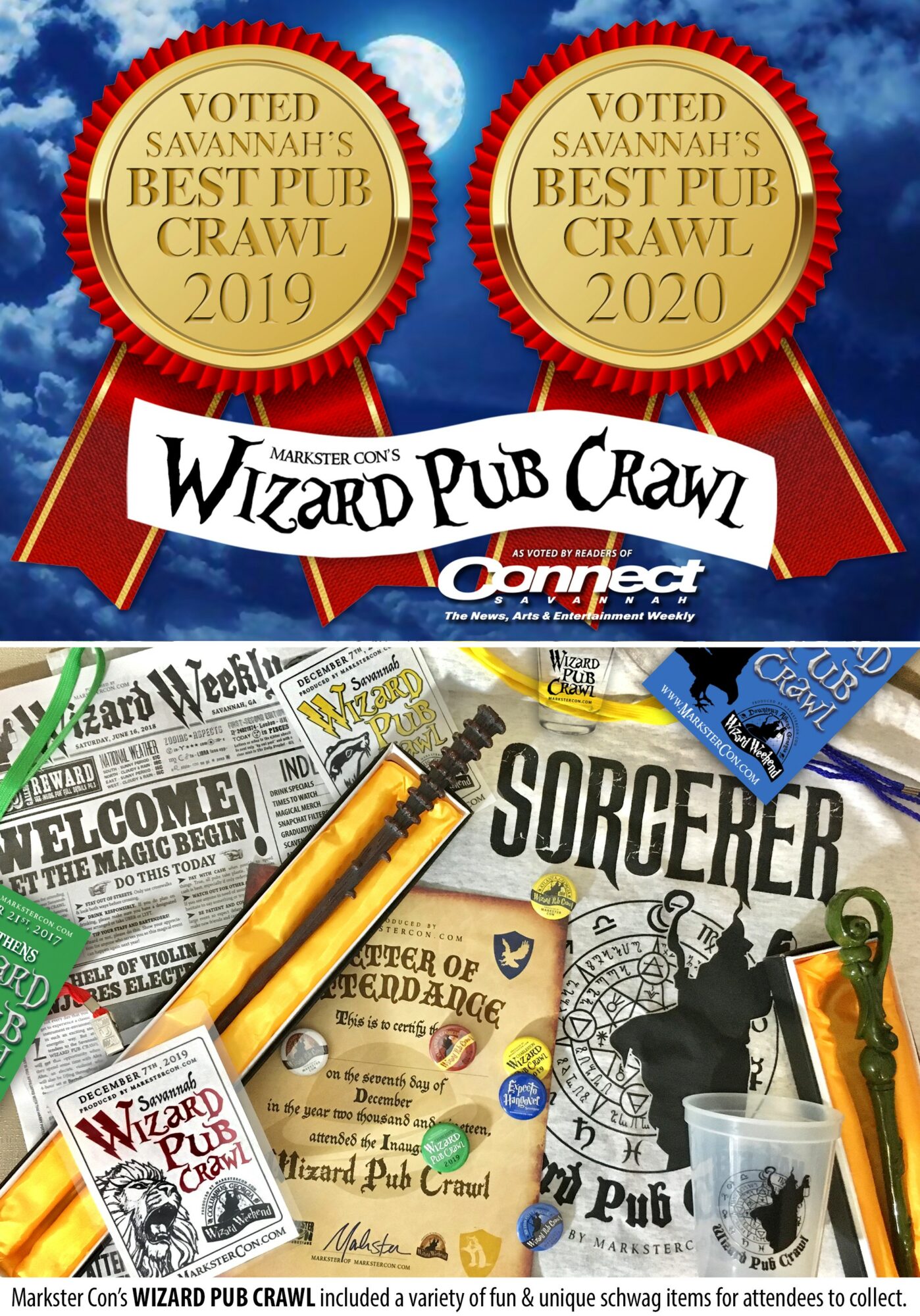 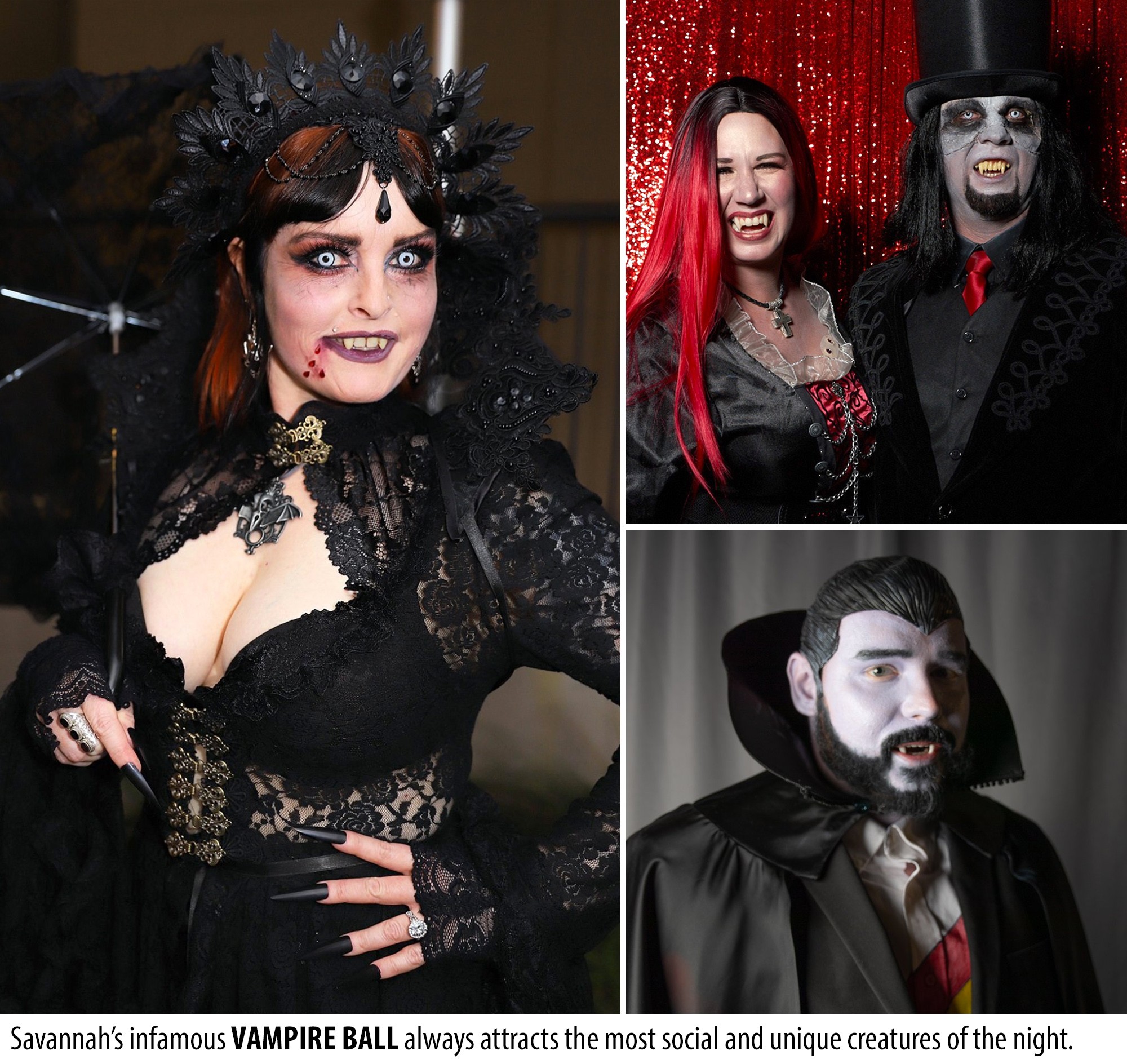 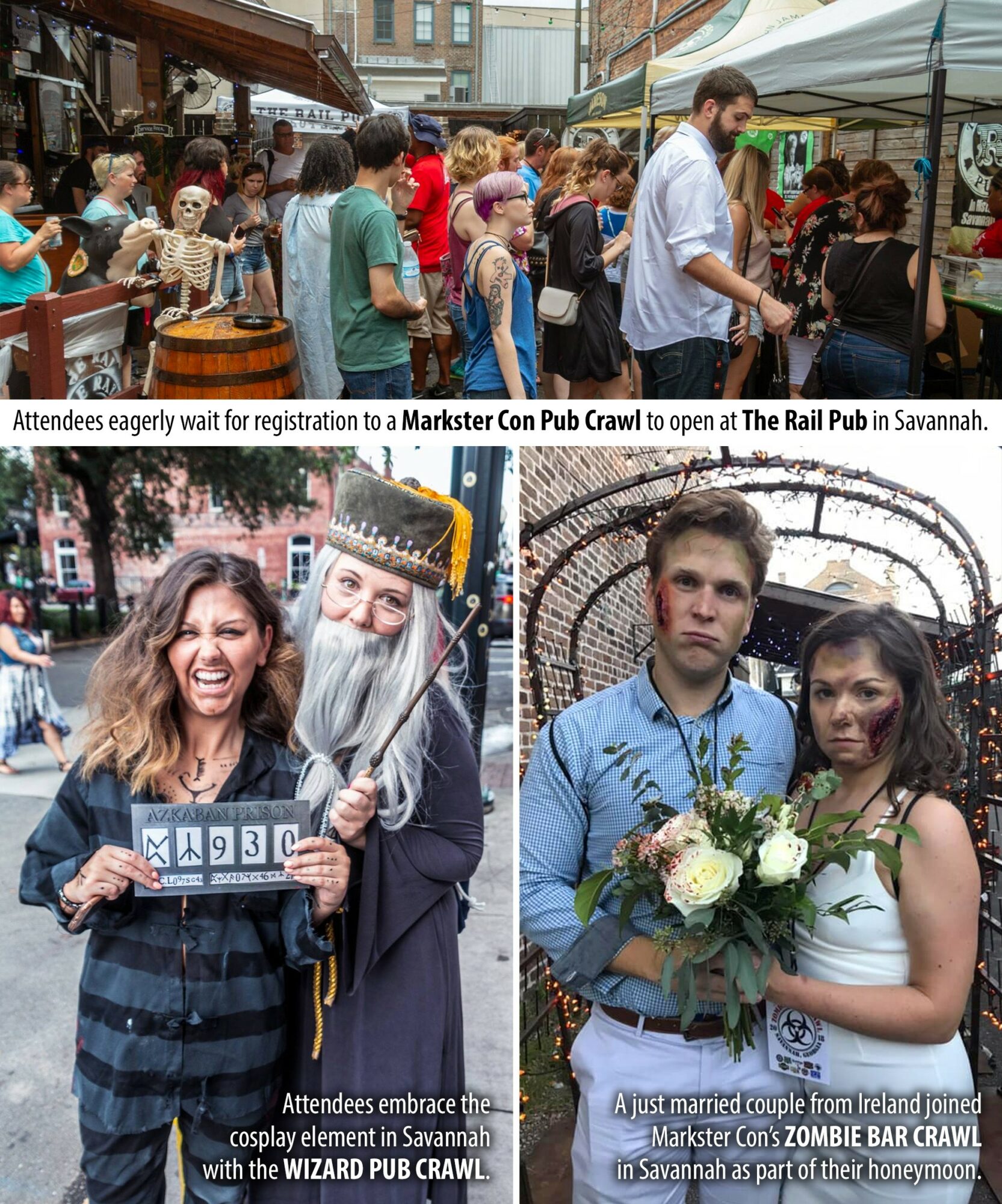